Answering the Call: How a midlife crisis and the coronavirus helped a nursing career blossom

When Shawn Archer answered the call to be an ER nurse, he transitioned out of vastly different careers. However, his leadership skills have carried him through, even during the coronavirus pandemic.

Some people think about their dreams and put their true calling on the back burner for years while working in unrelated fields. Archer wanted to go to nursing school 30 years ago but didn’t believe he could do it. So, he chose a different path. For a while he owned a bakery, and he later worked in trash and waste disposal. Even while he helped his wife study for nursing school, Archer's calling to be in nursing kept whispering to him.

A few years ago, Archer decided to take the leap. He enrolled at Aultman College and earned an associate degree in nursing before completing his bachelor’s in the field. He participated in student government and held multiple leadership positions. After graduation, he was hired at Aultman Hospital’s emergency department. “The ER is where my heart is,” said Archer.

Archer never anticipated starting his nursing career right before a pandemic. When COVID-19 started to spread throughout the United States, he said, “I felt a calling to serve the population that was suffering. After hearing all the stories on the news about the coronavirus, I felt I could be better utilized in a COVID-19 hot spot.”

Archer went to New York City for several weeks, at the height of the pandemic. As the city’s cases continued to climb, he was transferred to a facility in Boston, MA. He’s been there for three and a half months, working in extended care facilities. As part of this work, he’s utilizing his decades of leadership skills in order to serve as a charge nurse for the Commonwealth of Massachusetts Rapid Response Team, a group created in response to the pandemic.

Because Archer’s position is under government contract, he has adequate access to Personal Protective Equipment and feels grateful to have steady employment during this volatile time. He’s also thankful to be taking care of the geriatric population. “The people I see every day are very vulnerable. Since they’re in nursing homes, they have no contact with the outside world,” said Archer. “Sometimes I can make a difference in their day and be the sunshine during these darks times.”

As a frontline worker, the stress and fear of the unknown can take a toll. Archer admits he’s scared being around COVID-19 on a daily basis. Even though he has stayed healthy for more than five months, some of his teammates have contracted the virus. The work environment has rules and protocols in place to reduce the spread; however, the virus still creeps in at times. 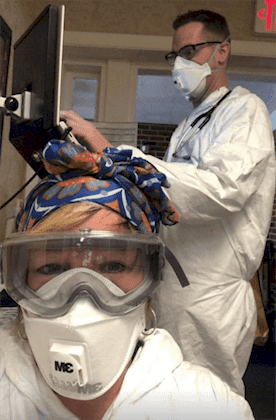 While Archer has been on the east coast, he’s been away from his wife and kids. He hadn’t seen them for four months, until the family took a road trip to stay with him for a few days. Regardless of the short amount of time they got to spend with each other, Archer felt lucky to have been with them. For now, the family is continuing to live in separate states to lessen the likelihood of his wife and kids contracting the virus from his high-risk job.

How do you prepare for a pandemic?

Nursing school prepares students for a wide variety of situations. But how can the education experience prepare them for the unthinkable?

Even while working during a pandemic, Archer said that emergency medicine is his love. Aultman College allowed him to expand his leadership capabilities after what he calls his “midlife crisis” of going into nursing. Participating in student government was a highlight for him in honing his skills.

Archer also enjoyed the small class sizes, having on-site clinical instructors who work at Aultman Hospital, and the ability to be immersed in practicing at the hospital. He also formed many personal and professional connections during his experience on campus and as an employee at the hospital.

Aultman College was able to provide the education and experience Archer needed to excel in his career – even during a pandemic.

Archer plans to continue working in Boston as a charge nurse through October. The experience is already completely different than when he started working there. With no end in sight for the pandemic, he says there is a possibility for him to permanently stay in the area; however, it will be a family decision.

If not, Archer envisions a future working as a traveling nurse. Archer said nursing is his calling. “ER is my love. I’m really running with this project as-is,” he said.

Is it your turn to answer the call? Learn about our nursing degree programs or request info about Aultman College.